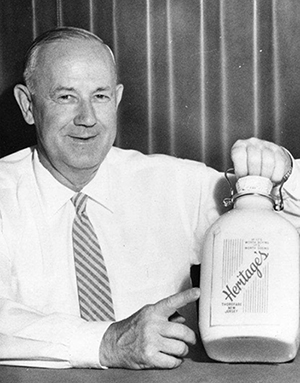 Heritage’s Dairy Stores’ roots date back to the early 20th century with Harold H. Heritage, known as Grandpop Skeets, and his brother Sam. Both cultivated and harvested fruits and vegetables to support their families on approximately 100 acres of land they inherited from their father. In addition to farming, the brothers sold gravel from their land to the State of NJ and Gloucester County roads department, and the gravel from the site was used to pave many area roads. The Heritage’s corporate offices and one of its 33 convenient stores are still located on this Jessup Road property in Thorofare, NJ.

During the 1920s, the brothers sought innovative ways to diversity their offerings and earn income. With milk as a staple in diets, it promised repetitive sales. Having saved enough money, Grandpop Skeets purchased a cow in 1929 and started his dairy business by delivering milk out of a Model A Ford to his family, friends and neighbors in the Thorofare and Woodbury areas. By the mid 1930s, he had increased his stock to 120 heads of milking cows and heifers. In 1936, he purchased a small milk route in Paulsboro, and began selling about 150 to 200 quarts per day. He leased area farm land to produce feed for his cows, and he, his family members (including his four children), and one employee hand-milked the cows and bottled the raw milk. In 1937, Grandpop Skeets started to pasteurize the milk and later began homogenizing it before bottling and selling it to customers.

After graduating from Paulsboro High School, his son Skeets (Harold M.) enlisted in the Air Force and flew combat missions during World War II. After returning home, he pursued and received a Dairy Manufacturing degree from Rutgers University. He later married and had five children. After his brother When he returned home from serving in the Air Force, he joined Skeets in working the business. Heritage Dairy Farms came to be as a result of the decrease in home delivery service and a desire to open a store in order to sell the high volume of milk that the milk plant produced. No convenient stores existed in NJ in the late 1950s, so the brothers scoured the dairy trade journals and visited various parts of the country for such a model. Skeets Jr. discovered the Lawson’s Milk Company convenience store chain in Ohio and studied its operations, including its idea of retail control, from which he built Heritage’s Dairy Stores. 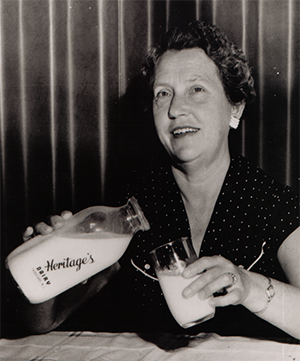 The first Heritage’s Dairy Store opened in Westville on October 10, 1957, on a site located on the edge of its home delivery business. Known as primarily a milk store, it operated daily from 9 a.m. to 10 p.m. and sold milk, bread, candy, cigarettes, packaged meats, and some groceries. Heritage’s Dairy Stores pioneered the convenient store movement in New Jersey and was also the first in the state to sell milk in gallon jugs.

Skeeter (Harold R.) picked up the leadership mantle from his father Skeets in 1990, leading further expansion in South Jersey. Skeeter’s top contributions include setting a clear vision for our company, raising up next generation leaders and the perpetuation of Skeet’s philosophy that people are the most important part of our business, thus preserving the culture we enjoy today.

Heritage’s Dairy Stores, Inc., currently led by the fourth generation Skeeter Heritage, now employs more than 500 people. The company still uses its own unique milk recipe and wholesales candy, tobacco and groceries from its Heritage’s Wholesale Company, which supplies more than 75 percent of products sold in its stores. Employees manage daily store deliveries, and its Construction & Service Team builds and maintains its stores and corporate offices. Its Human Resources and Employee Development Department manages all on-boarding and orientation, professional development programs, and workshops to instruct employees on its business, providing them professional skills and personal improvement opportunities.